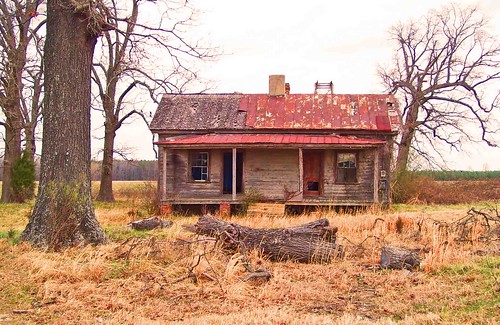 Although farmland is plentiful in my county, you could literally drive for miles on our rural highways without passing a grocery store or a farmer’s market.  Discarded tobacco barns and dilapidated houses pepper the road…a reminder of the families that once existed.  Rundown gas stations serve as the focal points for many of these small towns…snacks are more likely to consist of honey buns, Nabs, and a Pepsi Cola than of sweet potato chips produced from the harvest of the adjacent field.

Isolated from many modern luxuries like high speed internet and cable television, it is easy to understand why many of these residents feel abandoned…and angry.  We talk about the dangers of obesity but limit their access to fresh, local food.  We tell them to plant a community garden, yet ignore the “modern slavery” mindset this invokes.  We ask them to embrace diversity while many are still waiting for social justice.  Poor white families are labeled “trash” and poor black families are labeled “thugs”.  Our churches remain as segregated our politics, and our children wake up and go to sleep hungry…both for attention and for food.

As a lifelong resident of this community, I have always been aware of the economic importance of agriculture, the poverty of my neighbors, and the strained race-relations of our ancestors.  However, it was not until I joined our local Food Action Committee that I truly became aware of how these issues of the past have affected our current circumstances.  For the first time in my life, I am now the minority race in many of these conversations.  Instead of feeling outcast, however, I find myself in awe of these strong black men and women and their determination to make a positive change on the food choices and health of our community.

While my voice may not change history, I do believe it is possible for our white and black residents to unite and to overcome the issues plaguing our area. Race might have once dictated our roles in agriculture, but, through collaboration, we can ensure that local, fresh, affordable food is available to all.

One thought on “Food Access…It Isn’t Black and White”